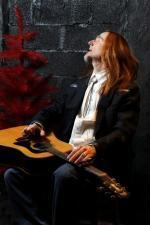 Because I'm not a big fan of Christmas music, these songs don't resemble most Christmas songs.  Instead, they're like many of the other songs I write - bluesy, twangy, introspective or dark.   These would be non-Christmas songs for people like me, who aren't fans of Christmas music.  Enjoy.  They're all available on Bandcamp - just click the "buy now" button. It takes you to a page with these four songs, and three others that don't appear on any albums either. :-)